Saw Palmetto For Hair Loss – Does It Work?

Male pattern baldness, or androgenetic alopecia, can cause hair loss that progresses with aging, leading to thinning hair and baldness. While there is no cure for baldness, certain medications offer hope that the process can be slowed down. However, these medications are often accompanied by less than desirable side effects.

The search for natural and alternative remedies to treat thinning hair has led to several viable options. Commonly included in this list of potential remedies is saw palmetto for hair loss.

What is Saw Palmetto?

What exactly is the role of saw palmetto in hair loss treatment?

What is the recommended Saw Palmetto dosage for hair loss?

What are the side effects of Saw Palmetto hair loss treatment?

What is Saw Palmetto?

What exactly is the role of Saw Palmetto in hair loss treatment?

One of the known causes of baldness is genetic sensitivity to DHT. Several hair loss treatments target the blocking of DHT to improve hair loss. The extract from the saw palmetto berries can inhibit 5α-reductase (5-alpha-reductase), the enzyme that converts testosterone into DHT. Saw palmetto hair loss treatment relies primarily on this property to curtail hair loss. Reduction in the level of DHT can prevent further thinning.

What is the recommended Saw Palmetto dosage for hair loss?

Saw palmetto is also available as a supplement – in tablet, extract, or capsule form. However, due to potential side effects and drug interactions, it is recommended that saw palmetto hair loss supplements should only be started after consultation with your doctor.

What are the side effects of Saw Palmetto hair loss treatment?

Saw palmetto is generally well tolerated. Stomach pain and headache have been reported as mild side effects. However, supplementing with saw palmetto may have more serious interactions with other drugs or supplements. Saw palmetto is itself known to thin blood so it should not be taken if you are already on other blood thinners. The blood-thinning effect of saw palmetto may also be dangerous if undisclosed before surgery, leading to excessive bleeding.

Saw palmetto hair loss treatment works similar to that of the medication finasteride – approved for both hair loss and enlarged prostate. Since both treatments can have a similar effect on the body, it is important to avoid taking the two medications together unless advised by your doctor.

Saw palmetto is a natural, ancient remedy for varied symptoms including hair loss. Taken in small doses, it is generally considered safe. However, despite its gaining popularity, saw palmetto has not been proven as a hair loss remedy. Further research may prove its efficacy, but in the meantime, it is best to take the supplement after consulting a doctor, while keeping an eye out for any side effects.

Hair Loss from Malnutrition: Is it Reversible? Hair Loss from Malnutrition: Is it Reversible? 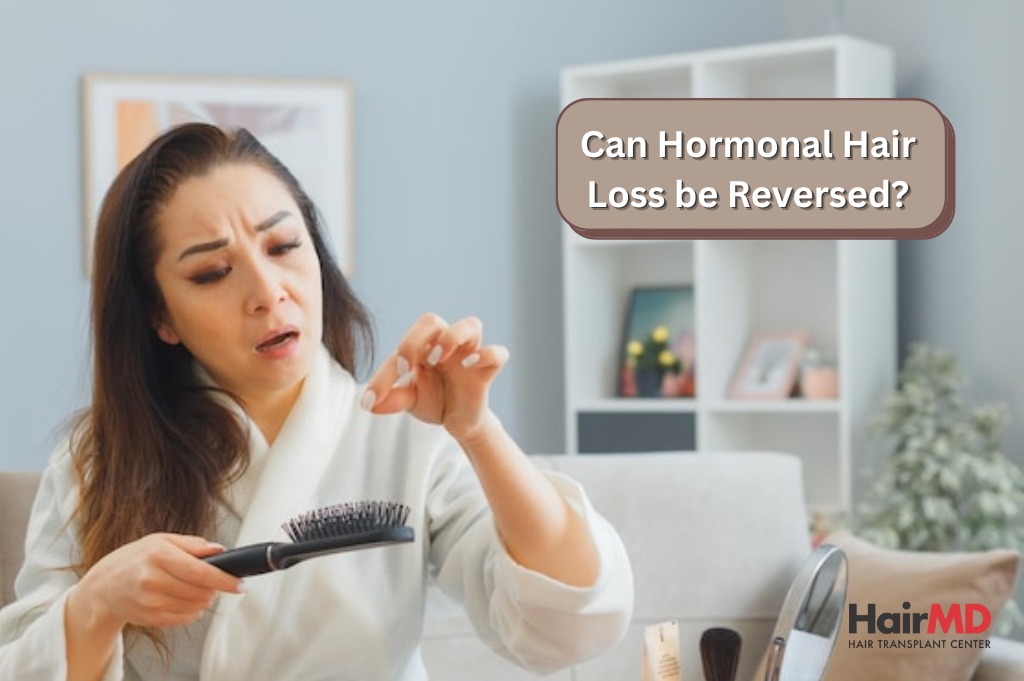 Can Hormonal Hair Loss be Reversed?

Hair loss is a common condition that affects males as well as females. Its causes range from genetics and hormonal fluctuations to nutritional deficiencies and exposure to harsh chemicals. Hair...

Biotin (vitamin B7) plays a crucial role in maintaining the health and quality of your hair. One of the main symptoms of biotin deficiency is hair loss and those who... 22042